In the wake of last week’s shootings in Dayton and El Paso, I saw the following exchange on Twitter:

Q on the chart: why a bubble chart? There's so much overlap it's hard to read, about only takeaway is that there are more shootings/deaths after 2010, but not the extent.
In my opinion standard stacked bar chart works better (like one from @TheEconomist)?https://t.co/tzH0DJ35j8

Treating shootings like this is gross for a few reasons, first among them that it's well-documented mass shooters idolize the ones before them and regularly see it as a competition and try to one-up each other https://t.co/YMJdTn6KJ2

This isn’t a new concern (see this 2017 piece by Mark Follman, recently shared by Denise Lu). In contrast with rank-orders and fatality counts, the bubble chart obscures information about fatalities, while connecting to the constant presence of mass shootings in American life. As shootings become more frequent, the bubbles blur together. It’s difficult to compare shootings, or even distinguish them from each other. The more often shootings occur, the less distinct each tragedy becomes.

I don’t know that the bubble chart was an intentional effort to avoid ranking mass shootings. It doesn’t actually appear in the linked article. Rather, it’s a promo image on Twitter, packing an emotional punch as readers decide whether to click the link. The article itself focuses on the share prices of gun manufacturers. Frequency of mass shootings takes up a tiny portion of the first graphic:

The in-article graphic cuts down on chaos, but it also cuts down on emotional connection. The shootings appear tidy rather than overwhelming. The dots are a sober burgundy against the cream-colored background, unlike the brilliant magenta-and-black of the promo image.

I’ve written about individuation, the technique of creating an individual symbol for each victim of a tragedy. The bubble chart takes the opposite approach by blurring the boundaries between shootings. Individuation honors victims, but overlap speaks to distant survivors: those of us who don’t yet have a personal connection to a mass shooting, but live against a backdrop of constant, numbing tragedy.

Aaron Williams combines individuation and overlap in The Fentanyl Failure‘s dot cloud graphics. Each white dot represents an individual person, but they scatter and overlap at random across a black backdrop:

The visualization appears abstract, until scrolling reveals an annual death count from synthetic opioids, followed by the name and face of a victim. 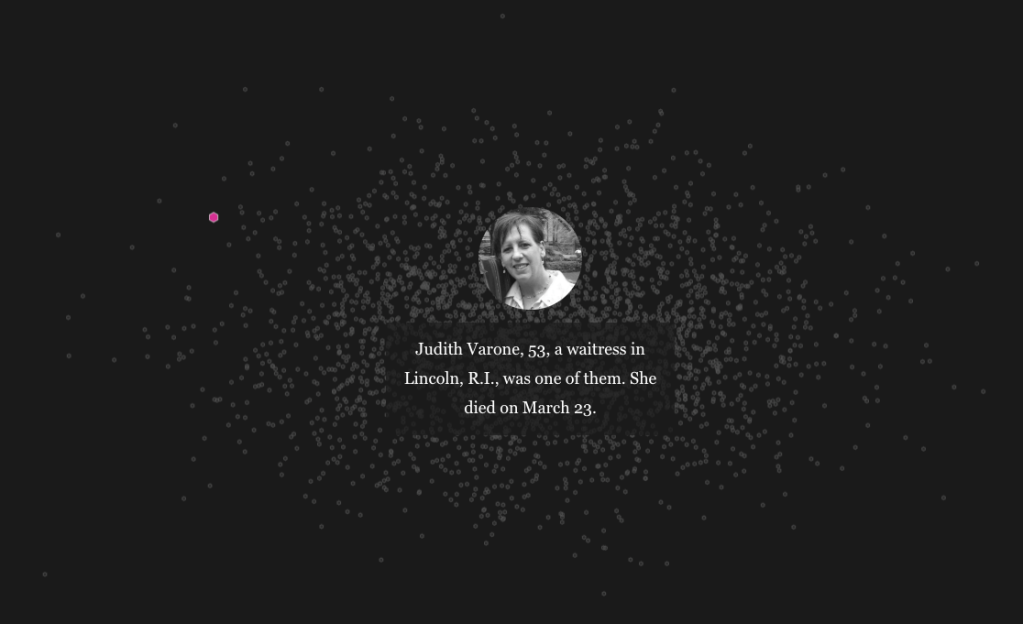 The dot clouds appear throughout the article, one for each year between 2013 and 2017. As deaths mount, it becomes harder and harder to see each dot. Each cloud takes care to highlight an individual death, but by 2017, the full picture is blinding.

I wouldn’t advocate using overlap on its own, without more concrete visualizations for context. The fentanyl piece opens with a line chart of overdose deaths, showing the reader that synthetic opioid deaths spiked after 2013. Between the dot clouds, a cartogram shows death rates by state. In contrast, the mass shooting bubble chart stands alone as a Twitter promo image. The shooting graphic does link to an article with more sedate and interpretable visualizations, but someone scrolling through their Twitter feed gets the gut-punch without the context.

Overlapping dot plots are intentionally overwhelming. They communicates via confusion. The greater the overlap in a chart (and the greater the contrast with the background color), the more chaotic and overwhelming the chart becomes. In the fentanyl piece, I can’t really interpret the number of dots in 2017–how can I hope to take in the emotional magnitude of 28,869 deaths? Instead of being tidy and comprehensible, the cloud is intentionally difficult to grasp.

Overlap runs counter to all my data visualization instincts. In response to the original Financial Times bubble chart, Toon Vanheukelom tweeted, “There’s so much overlap it’s hard to read… in my opinion standard stacked bar chart works better.” Vanheukelom is right, and Vanheukelom is wrong. If the goal is to compare numbers, the stacked bar chart does work better. But if the goal is to prevent comparisons or connect to the experience of everyday crisis, overlapping dot plots are a remarkably powerful tool.

View all posts by afowers